This post will describe how I inspected the IP traffic of a cheap pan/tilt IP camera. Then continued to open the camera up, connect to the serial console of the SoC; extracted the root password and logged in via telnet over the wireless interface. My goal was to have a look at the security of these very cheap IoT devices, and see how they could be improved.

Let’s have a look at our victim: 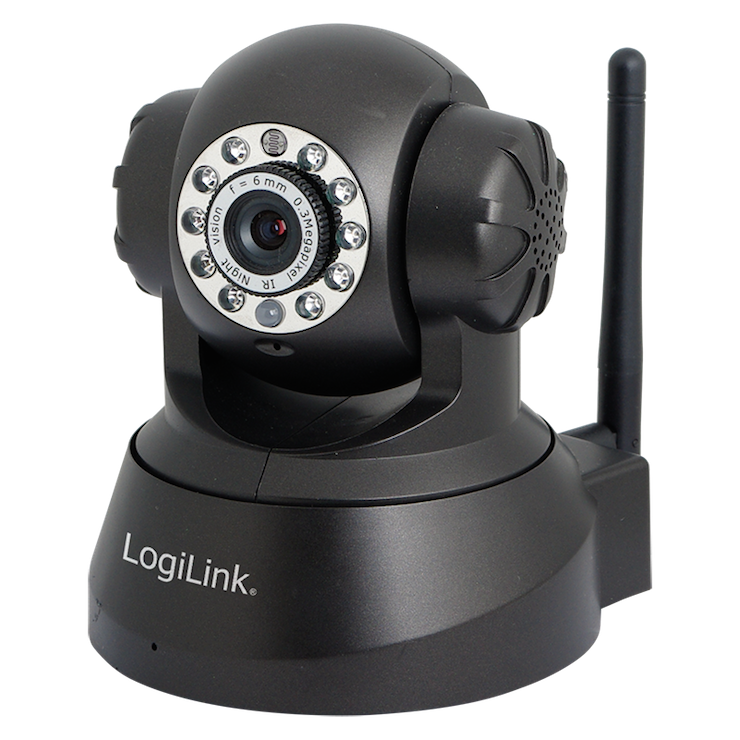 IP Cameras have become extremely cheap in the last couple of years. Mass production made the prices of decent quality image sensors, and very capable SoCs, drop significantly. Our victim in question is currently still available for about €43, but clones/copies/similar models are available from China for even cheaper.

The cheap price is great if you want a cheap alarm system or an easy way to spy on your neighbors/pets, but it also means that the included firmware and software isn’t very well developed (you get what you pay for). Accompanying apps are buggy, features are lacking, the firmware is buggy and tends to crash and the security was an afterthought.

Security in cheap IoT devices is becoming a big issue. Manufacturers don’t really care about the personal data belonging to the users of their products, and the users themselves don’t have the technical knowledge to asses the security of the device or to secure it (which sometimes means to just not use it).

As a quick example you can have a look at this simple Shodan search query (Shodan is a search engine for the Internet of things, or basically it indexes everything Google doesn’t), and be amazed at how many shops, living rooms, playgrounds, parking lots, kitchens, stairwells, gardens, factories, bedrooms (???), classrooms, pools, hotels and even the mourning-hall of a funeral home, have an unsecured live video feed for you to stare at.

Before I was going to use the above mentioned IPcam I wanted to have a look at how much data it leaked and to whom, and how hard it would be for someone to hijack the video feed and get a live view of my dog. (I was going to use this camera to remotely witness my puppy destroying my living room)

The Logilink Logilink WC0030A has a 0.3 MP sensor, a wired ethernet interface, a WiFi radio (wired and WiFi can’t be used at the same time), some IR LEDs up front, 2 way audio, it can pan and tilt and has a trigger input and output (for alarm type things). All-in-all a fairly standard (low resolution) IP camera.

The camera comes with a web-interface accessible through a browser on its build in web-server and a seems to be compatible with a plethora of mobile apps that all come in a different flavor of buggy. The manual mentions two different logins in two different sections (admin:000000 and admin:1234), trying them at random at all the different login prompts seems to yield the best results. 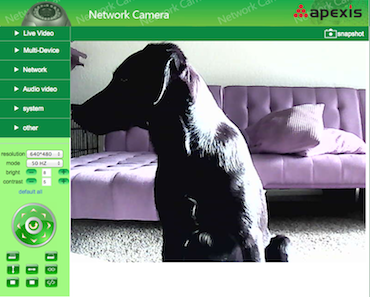 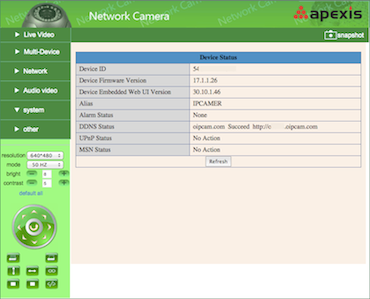 The web interface has your standard buttons and shows the device firmware- and web interface version (it’s not the original web interface, I had reflashed it by this point with the Apexis one). I also don’t own a purple couch, the white balance on this thing is horribly off. You can configure a custom dynamic DNS, but even if you do, or if you disable it, it seems that the camera always connects to the built in ddns-server (oipcam.com). No way of disabling that. The direct MJPEG live-stream seems to be available at http://[IP]/videostream.cgi?usr=[USERNAME]&pwd=[PASSWORD]

Next steps will be to try to login to the camera, get a terminal, see what OS it’s running and check what data is getting send to where.

Let’s do a quick port scan of the camera to see what services it runs:

Port 80 was to be expected, telnet is a little more worrisome. Lets try to login with the standard passwords:

At least there is a different password on the telnet login than the ones mentioned in the manual. I guess that’s something. Next step would be to go ahead and start brute forcing the telnet login, but lets first have a look at the different outside services the camera is connecting too (and what passwords it uses for those).

If we want to monitor the traffic from and to the camera, Wireshark is probably the best tool. We can’t run it on the camera itself of course, so we’ll have to intercept the packets on the router the camera connects to. I’m using a Nexx WT3020 which becomes a very cheap, capable little router when you re-flash it with OpenWRT. Ideal for snooping on traffic of connected hosts.

We’ll just SSH into the router and use tcpdump to print all the packets, which we then pipe through to a local instance of Wireshark. You can just install tcpdump-mini via the LuCI (the openWRT web interface) or via SSH:

Next we connect to the router, start a packet dump on the br-lan interface, exclude our SSH port, and send it to Wireshark

Or we can also just dump it into a .pcap file and dissect it later.

After connecting the camera and letting it go through its boot-cycle, lets open the capture file in Wireshark and start filtering:

This filter gives you all the packets going in and out of the camera based on the camera’s MAC address: 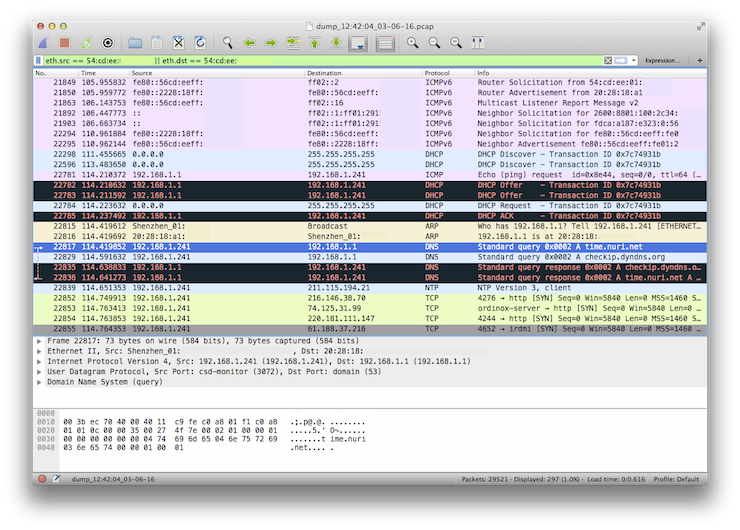 We can see the camera making a standard DHCP request first, after getting an IP from the router, the camera sends a DNS request for time.nuri.net and checkip.dyndns.org. The first one is an NTP server (somewhere in China), probably used to set the clock of the camera. The second URL is used to get the outward facing IP of the camera via dyndns.org.

Then the camera continues to make a DNS request for oipcam.com, and sends the following HTTP request to it:

(I changed user and pass here, MAC is all zeroes though). oipcam.com answers with a HTTP 200 OK packet with contents UP.

Next DNS request is for www.apexisalarm.com, with an HTTP request to

After which the camera pings the router, probably to check if the network is still up.

Several DNS request for www.ip138.com, which all return failures. And eventually the camera loops while sending ping requests to the router.

So it seems the camera uses 2 outside services located at oipcam.com and apexisalarm.com. The other requests are for time and external IP (these could leak your IP too of course).

Trying any of the usernames and passwords found in these HTTP requests in the telnet login doesn’t get us any further either.

Next step is to open this thing up, and see what makes it tick!

Ports on the back of the camera, note how the silkscreen for the alarm inputs is a little more clear than the markings on the casing. 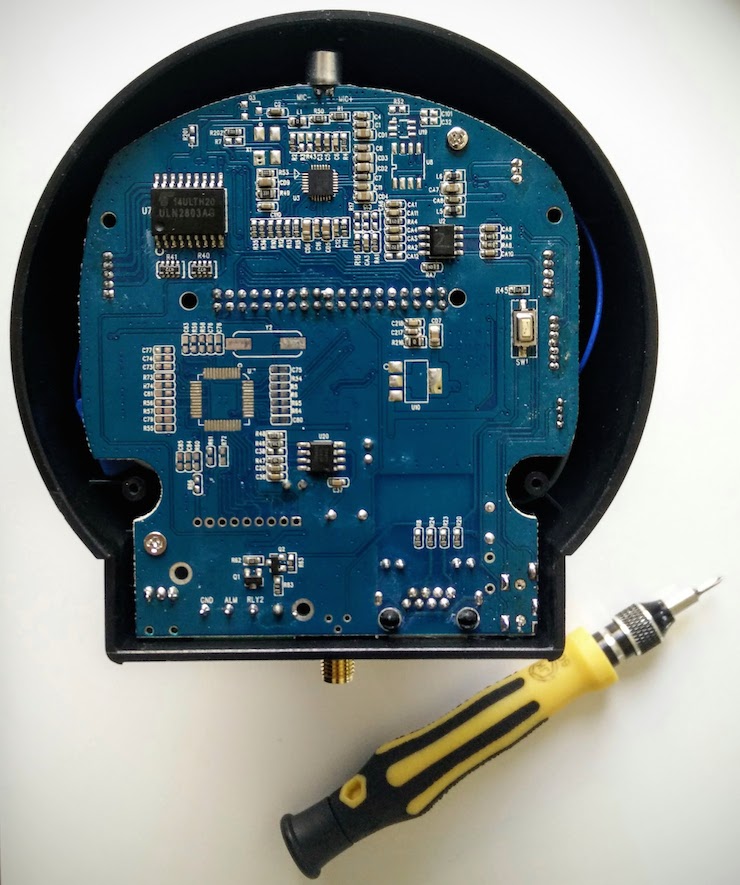 Bottom of main PCB, nothing really interesting here, note the reset button on the right, the unpopulated QFP and header on the left and microphone at the top. 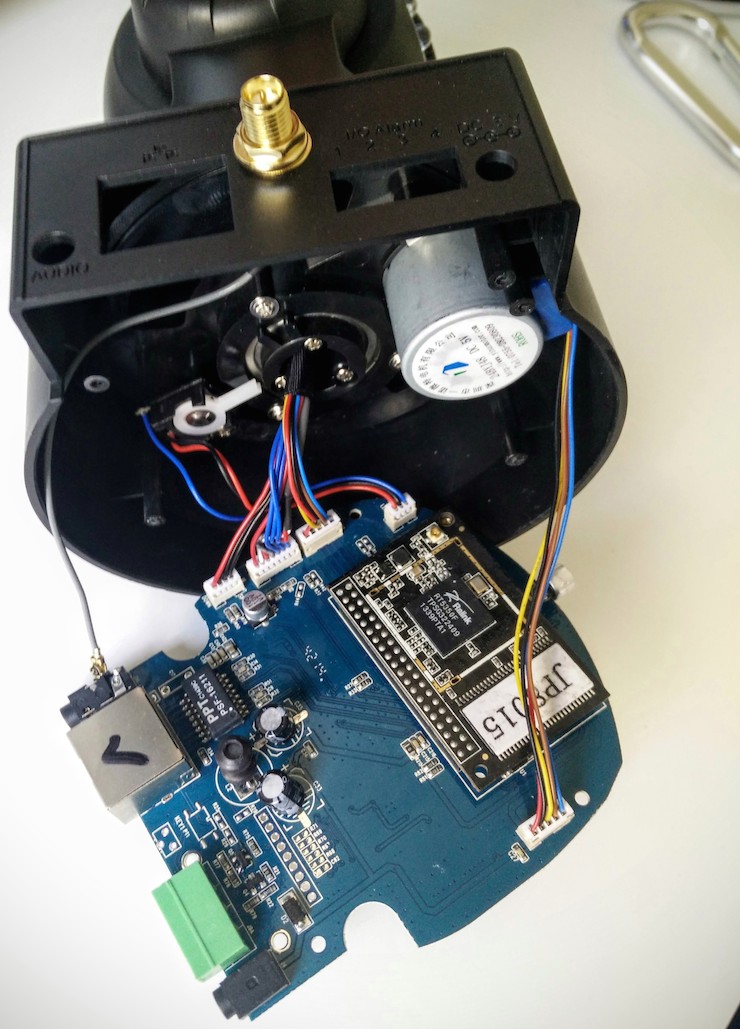 Inside we can see that the SoC controlling the camera is the Ralink RT5350F on what seems to look like an OEM module plugged into the main PCB as break-out board. The JP8015 marking seems to be a reference to the Apexis model number of the camera. We can also see that the movement is controller by two 5V DC stepper motors.

This Ralink chip is pretty capable, and is the heart of some smaller cheap WiFi routers, most of them running OpenWRT. It runs Linux at 360 MHz, has 24 GPIO pins, 8 MB storage, 32 MB RAM. This particular OEM module seems to resemble the NixCore X1 a lot, but it’s not quite the same. Let’s hope the pinout of the main header matches though.

Having a look at this table, and the documentation for the X1, we should be able to get a serial terminal on RX2 and TX2, which is pin 39 and 40. If we have a look at the camera, those two pins are there on our module, but aren’t populated. Looks like a good sign.

Lots of interesting stuff here, but let’s focus on trying to get into the camera via telnet. We can just:

This shows us there’s only one user, root with password 1naesbIMqm.cY. This is of course not the actual password, but the password encrypted with a one-way DES algorithm.

Well that was easy.

Now we can start poking around the file system. test.sh seems to be doing most of the work and starts the 2 main processes:

Killing any of these processes makes the watchdog timer run out and resets the system.

Looking at the loaded kernel modules:

It seems we’re using the I2S interface for sound, usbvideo or UVC for the cheap Alcor Micro Corp USB camera (058f:3861). I2C, probably for the stepper controllers and gpio for the alarm input / outputs and the LED.

If we take a quick look at videocatch by dumping all the strings in the executable:

We can see that this process does the init of the USB camera, and seems to deal with the video.

Dumping the strings in the ipcamn process:

Ipcamn seems to be dealing with all the rest of what makes the camera and its services run.

At this point we have a good idea on what services the camera connects to, and what ports it opens. We could go further and take apart the ipcamn executable. But with a telnet login of root and 123456 , I kind of don’t want to know what’s in there.

My current solution is to block all traffic going to and from the camera and the outside at router level. And having a video server like motionEyeOS or ZoneMinder do the heavy lifting of recording, storing and streaming video.

The ideal solution to this problem would be to compile a custom build of OpenWrt and flash it to the camera (Check the update below!!). And of course getting the USB webcam and all other I/O devices to work. This way you’d have full control of the camera and all its data. As OpenWRT and DD-WRT can transform shady cheap WiFi routers into a solid, stable piece of networking equipment, a version of these OSes for IP cameras could transform them into a cheap, stable and secure way of doing video surveillance. I call it: CamWrt or OpenCamWrt or OpenCam … not entirely sure yet. That’s for a future post.

If you want any more info on any part of this teardown, or noticed some mistakes, don’t hesitate to contact me or leave a comment!

Update 29 August 2016: Thomas got OpenWRT running on the WC0030A IP camera. You can track his progress on his blog.